For details regarding prevention measures in place and the COVID-19 Pioneer response click here.

Galaxy Three: Why What Is Happening a Billion Light Years Away Right Now Matters to You

Galaxy Three: Magnificence in the Middle

Since 1983, Dwight Nelson has served as lead pastor of the Pioneer Memorial Church on the campus of Andrews University. He preaches on the “New Perceptions” telecast, teaches at the theological seminary and has written some books, including The Chosen. He and his wife, Karen, are blessed with two married children and 2 granddaughters.

There is a disease in Galaxy Three that threatens the existence of humanity. It's effects are devastating and it carries a 100% fatality rate. But there exists a rare and costly cure...
Saturday, September 06, 2014

More In This Series

11/22/2014
Galaxy Three: Intergalactic Rescue
The War approaches it's bloody end. The Rebel unleashes his full fury upon the inhabitants of Galaxy Three. The Loyalists cry out to their King for deliverance. How long must they endure? How long...?

11/15/2014
Galaxy Three: From Flower Girl to Bride
The War rages on as the Rebel releases his latest weapon upon the inhabitants of Galaxy Three: a viral infection of "self" rule. Every man, woman and child is infected. What response can the King in Galaxy One bring to counter such a powerful deception?

11/08/2014
Galaxy Three: Galaxy Three's Third Cleansing
The disease the Rebel unleashed on Galaxy Three must be not just contained, but completely cleansed from the Galaxy. However, the Council declares that three separate cleansings must be conducted. The universe wonders: Why?

10/18/2014
Galaxy Three: The Abuse Victim
The War rages on. The inhabitants of Galaxy Three groan under it's weight. How can such suffering go unchecked? The universe looks to the King for an answer...

10/04/2014
Galaxy Three: Recruiting Like ISIS for Melchizedek
The War has changed. No longer a battle for territory, the Rebel and the King both desire only one thing from the inhabitants of Galaxy Three – Allegiance

09/27/2014
Galaxy Three: The Story of the Sperm
When the King left Galaxy One to infiltrate Galaxy Three, there were 270 days during which his whereabouts were unknown. Yet this mystery could hold the key to victory in the long war...

09/20/2014
Galaxy Three: Magnificence in the Middle
The King commands the battle for Earth from His throne in Galaxy One. His followers in Galaxy Three are instantly provided with aid an reinforcements the moment they ask. But can such a proxy war be won?

08/30/2014
Galaxy Three: The HP Factor
An intergalactic civil war threatens the existence of the universe. The King of Galaxies battles the tyrannical Rebel who seeks the throne. Now the fate of all life will be decided at the battle for Galaxy Three.
All Sermons
Download
New Zoom Sabbath School Class

We would like to inform you that the Seminary Sabbath School class usually taught by Jacques Doukhan and others in room 150 at the Seminary, will be held this quarter (January-March 2022) via Zoom, with the participation of Dr. Felix Cortez, author of the current quarterly on Hebrews. If interested, here is the zoom link for the whole quarter. We appreciate your help in spreading this information to other class members.

Dear friends,
Dr. Jacques Doukhan will teach this week's lesson (January 22), "Jesus our Faithful Brother." I invite all of you to this spiritual feast, to think, discuss and grow together. See you soon,

Recently, Neighbor To Neighbor(N2N) received $35,000 from the Michigan Advance Plan (MAP) special projects fund to help with the renovation of the Client Services area. This is a gift to the churches in District 9 that support N2N. Have you supported MAP recently? It is an opportunity to support projects like this as well as evangelism, education, camp meeting and camp. Consider being a MAP Partner and devoting one percent of income each month to these lay sponsored projects.

How To Be Rich

Come and learn the Bible way: “I will not put my trust in riches but in HIM who richly provides.”
Something In Common Sabbath School meets in Room 141 at 10:30 am

Adventist Engaged Encounter (AEE) is a fun weekend intensive workshop for seriously dating, engaged, and newlywed couples. AEE is not group therapy, no sharing with the group required, and it IS a private, safe environment with 12 guided sessions by marriage mentors. AEE is a great tool to add to your relationship toolbox, but AEE IS NOT CRISIS COUNSELING. AEE IS designed to help you take your relationship to the next level of love, connection, focus, and commitment. The weekend of Meetings will be held in the lower level of Nethery Hall starting at 6:30 PM 2/18/22. 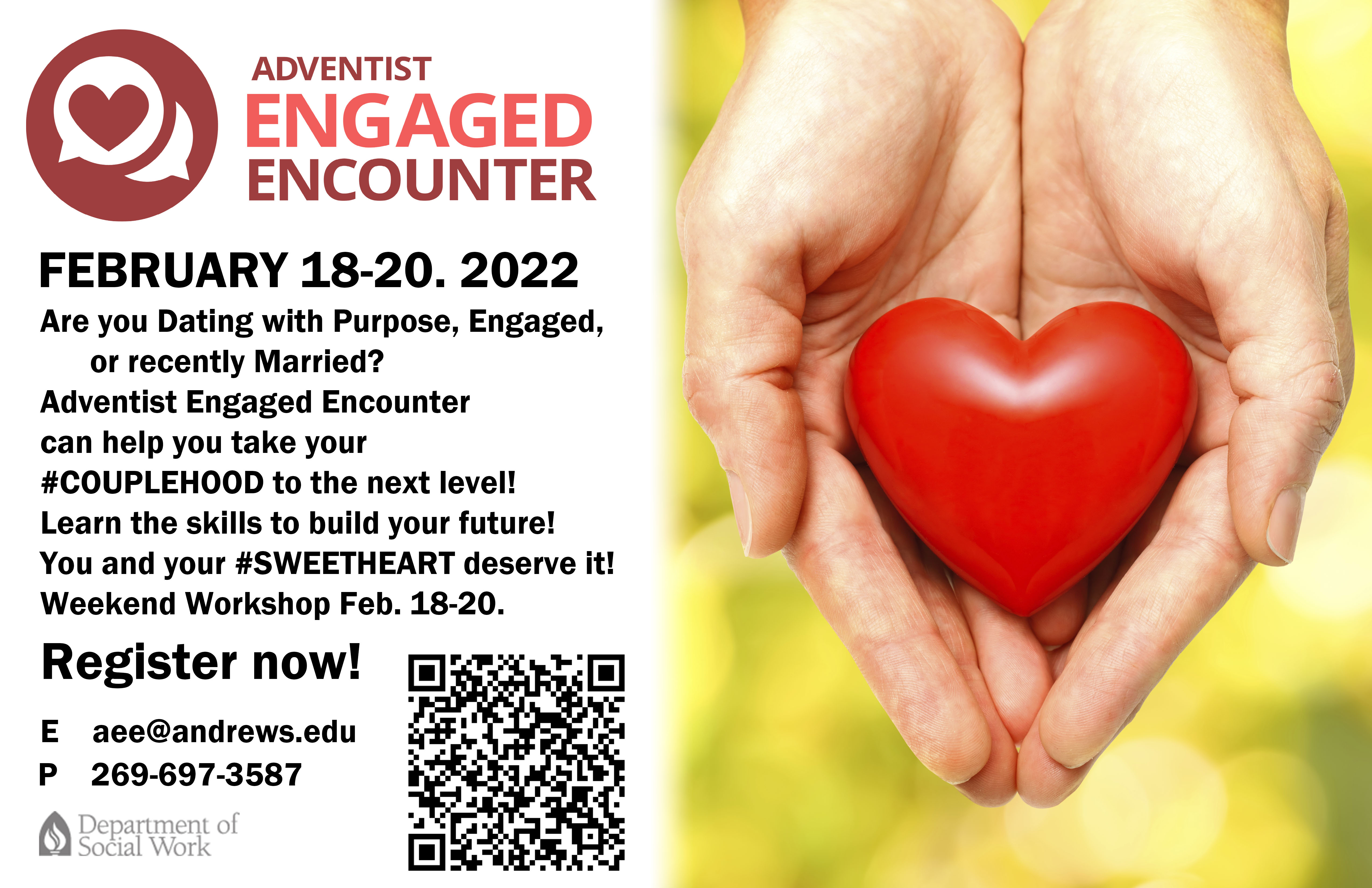 I hope you will join us (online or in-person) for a worship journey we may never have been on together. "A Banner Unfurled" will be a fresh plunge into the shining truth about our Creator-Savior and His gift of the seventh day, the Sabbath, to humanity.
We won’t be arguing over which Day—we already know. But we will be creatively exploring how existentially/experientially the treasure of Christ embedded in the Day can reignite our pandemic-shadowed lives with new light and meaning this New Year.

I'm praying we'll never be the same again as a result of this exploration. And I hope you invite your friends and family to join us.

For your handy reference here is the lineup of our Pioneer winter Sabbaths in 2022:

Andrews University’s Children’s Learning Center, The Crayon Box, is looking for a dedicated, responsible, loving and creative individual to join our staff to teach and care for our Pre-K (4 year old) children. Must meet Michigan LARA requirements for Lead Caregiver. Must be available to work 9:00-3:00 Monday - Thursday. This position is temporary with the possibility leading to full time employment. Background check, finger printing, TB test and additional job related trainings required.  Job requires much physical activity and a high energy level and accuracy and efficiency is required

The applicant:
Must be at least 18 years of age with high school diploma. Must meet LARA requirements for lead caregiver: a bachelor's degree or higher in early childhood education, child development, or a child-related field, associate’s degree or higher in early childhood education or child development or high school diploma with coursework in child-related field and experience. Must love children. Must have a warm and friendly personality with sensitivity to the feelings and needs of both children and adults. Must display a willingness to fulfill responsibilities in accordance with the center's philosophy and mission. Must be a Seventh-day Adventist in good and regular standing.

Where You Can Serve

Pioneer Memorial Church is a place where serving others is its reason for being. There is a healing power in serving others. In the next few weeks, you will hear of opportunities to serve and heal. Respond to the call on your mind and heart. Serve as God leads you. Heal as God heals you.

Supernatural Protection
2 Timothy 4:18 “The Lord will rescue me from every evil attack and will bring me safely to his heavenly kingdom. To him be glory for ever and ever. Amen.”

God has protected us from multiple supernatural powers. The apostle Paul speaks about his assurance concerning God’s protection and deliverance from every evil attack. God’s rescue from such supernatural powers was one motive leading Paul to constantly give God glory and worship. As a young boy, Eric struggled with frequent nightmares, dreaming of attacks by strange animals that looked like some of the divinities worshipped in his culture.

Frequently, he would wake up sweating and crying. As soon as he went back to sleep, the nightmares would return. To make things worse, Eric’s family would often hear strange noises on the steel roof of their house, like someone running or a stone rolling. The parents were convinced that their home was haunted and that the evil spirit wanted to kill their son. They tried every possible means to ensure protection from these supernatural attacks. Among many things, the parents would bring the boy to a Hindu priest for regular rituals, and once a year, they would do a pilgrimage to the grave of a priest. They vowed not to cut Eric’s hair until he turned 7.

Apparently, these strategies did not bring the little boy peace. Finally, they resolved to seek help from the God of the Bible. At bedtime, the mother would read Psalm 91 while laying hands on the boy’s head. Gradually, Eric began making the connection between a night without nightmares and prayers before sleeping. He became convinced of the existence of a God who is more powerful than the evil forces which were harassing him. For complete security, he dedicated his life to the powerful God.

Evil attacks may be visible or invisible, known or unknown, but they are a reality that many experiences. However, everyone and everything dedicated to God can be securely preserved. This week, as we worship with our tithe and regular offerings let us express thankfulness for the divine protection.

It's a fresh new year, and it's time for a fresh new Grow Groups season! Grow Groups are Pioneer’s small groups that incorporate 5 S's: Shared interest, Spiritual touchpoint, Service project, Social event, Semester-based. That’s it, in a nutshell! Grow Groups are for EVERYONE—church members and nonmembers, local folks and our friends around the world are all welcome to join.

Right now we’re looking for leaders for both in-person and online groups. If you are passionate about something and want to use that passion to foster community and lead others to Jesus, we can probably help you turn that passion into a Grow Group! Let us know as soon as possible, because the deadline to sign up to lead a group is January 20. For more information please email growgroups@pmchurch.org or register your group today!

Erin Dockerty, a Pioneer member, is coordinating a virtual event in a private Facebook community where you’ll receive daily scripture & encouragement. Participate in the community at the level you are comfortable. Let's fight the overwhelm of this world with more of Jesus. Join at https://forms.gle/iMAQ2tFGMHqfuL9r8